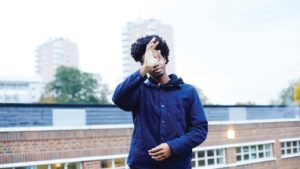 At just 22 years old, Sequoyah Murray is crafting the kind of concise, singular musical statements that many artists strive for their whole careers. His mutant brand of modern soul is as deeply eclectic as it is instantly arresting, a quality that drew early comparisons to Arthur Russell. Like Russell, Murray has a boundless, playful approach to composition; an incredible breadth of vision balanced by concise editing. Futuristic electronics, West and North African influenced polyrhythms, gospel vocals and psychedelic Tropicália textures blend seamlessly, anchored by his astounding three-octave baritone. Before You Begin, Murray’s debut album, demonstrates the immense scope of his artistry. Composed, played and produced almost entirely by Murray himself, the album takes the listener on a deeply personal journey through youth.

Before You Begin traces Murray’s “historical fiction of his own life,” as he puts it. It is as sensuous and blissful as it is blue, mining memory to craft vivid, dreamlike pieces that feel instantly relatable yet otherworldly. The album is influenced by Murray’s experience growing up in one of the world’s music capitals. Atlanta’s hip-hop and trap heritage finds its place in his inventive lyricism, future-seeking sonics and DIY approach to music-making. Although Murray points to rap as one influence, he cites Atlanta’s lesser-known jazz and free-improv scene as facilitating his development as an artist. Growing up in a musical family, his parents being active musicians, Murray often joined them in improvisation sessions. His frequent exposure and involvement with such a creative environment helped nurture and develop Murray into an adept improviser.

Murray’s approach to writing Before You Begin mirrors his experience in free-improv circles, fearlessly exploring a myriad of ideas and sounds without focusing on form and then meticulously arranging each track that would eventually make up the album. A great example is “I Wonder” a song that evolved from sessions with his sister experimenting with medieval chanting, which Murray later re-sampled and manipulated into the instrumental bed for the track before adding upright bass. “Sublime”, with its propulsive synth and distorted new-wave drum loop, was written on an iPad with a friend while working in their day job at the Rialto Theatre. Such a joyful, open approach to composition gives Before You Begin it’s immediate appeal a considerable depth.

Before You Begin distills an enormous wealth of ideas, emotion and detail into a stunning debut. Murray’s joyful energy is infectious on his bravely intimate self-portrait, painted with an inventive and unexpected collection of sounds.